As an early anniversary trip, we headed back to some of our favorite places in the world, Bryce and Zion National Parks. Southern Utah is the place we love to be, so we loaded up the truck and drove through Cedar City. Stupidly, I planned this trip in advance and didn't pay attention to the fact that it was a holiday weekend. We planned on taking vacation days on Friday and Monday to avoid normal weekend traffic we'd normally hit due to the idiot Vegas crowd...

Friday, we left our house early to try and make it to Bryce before sunset. Instead of the normal route going through Zion on the way there, I decided to go up I-15 a little further north and cut through Cedar City and along highway 14 through the mountains. The weather had been clear for at least a week before the trip, so I wasn't worried about hitting any kind of snowy or impassable roads. Before we got that far, we stopped at the less visited Kolob Canyons side of Zion, which is right off I-15 about half way between St. George and Cedar City. I got some pretty amazing pictures of the sun on the red & white rocks of Zion with my truck in the foreground. Alex tells me Chevy should be paying me money for my shots. 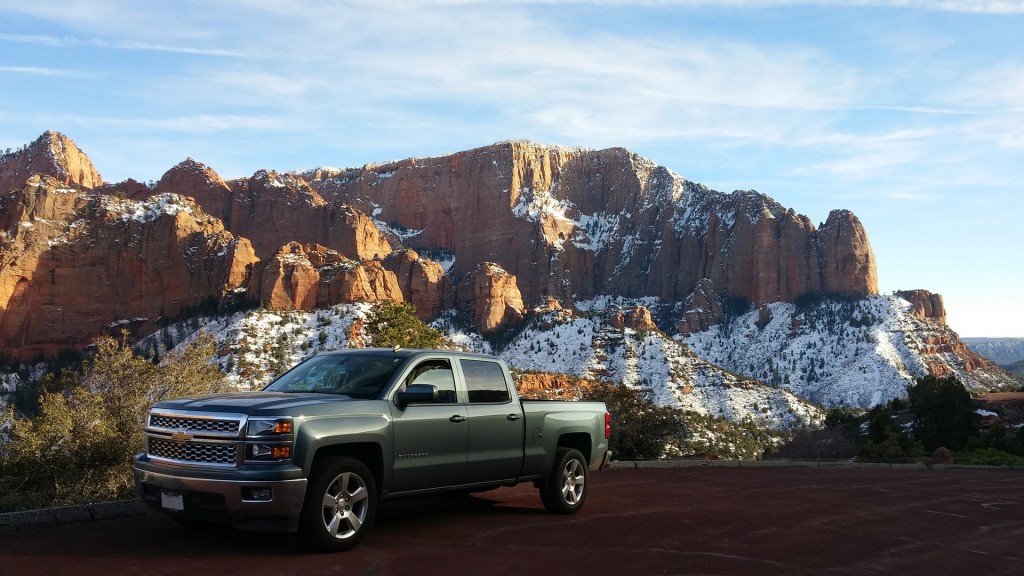 By the time we got in to Bryce Canyon City and Ruby's Inn, where were staying for a couple of nights, it was already getting dark. We went to dinner at the Cowboy's Buffet & Steak Room in the main lodge. The Spaghetti & Chicken Alfredo was pretty good. After a nice relaxing evening reading in our hotel room, we turned in for the night in preparation for our adventure the next day. 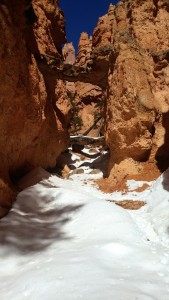 Saturday morning, after breakfast at the same restaurant we had dinner, we headed into Bryce Canyon. Sunset Point has access to a few good trails, and so we set out to hike the Navajo trail. Due to winter being winter, part of the trail was closed, so it wasn't actually a loop. Our original plan was just to walk down a little way to get some pictures, since we didn't have the correct gear to go hiking in the snow. We just went down a little way, but found it wasn't extremely difficult to keep going, so we did. After hiking down the trail to the bottom, we turned around and headed back up, since the loop was closed. This was the first hike on our trip, and it was probably the most difficult. Alex and I are working on losing some weight, so this was a perfect opportunity to get our exercise in. We then continued down the road to hopefully hike more trails. The trails at Rainbow Point were covered in snow, and not nearly as trafficked as the previous trail. We didn't feel comfortable trying to hike in the soft, deep snow, and so headed to Mossy Cave 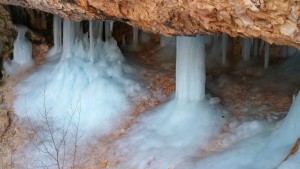 on the northeastern side of the park. Mossy Cave is a nice trail that fewer people know about and hike, so it was a nice quiet end to our day at Bryce. The springs were still running, like always, but because it was cold, the water was forming really cool icicles in the cave. After witnessing a gorgeous sunset and consuming a hearty dinner of barbecue ribs, we retired to hotel room for the last night in Bryce. One cool thing I found was that since it was so cold outside at night, I could just fill water bottles in the sink and leave them outside to freeze overnight, creating cold packs for our ice chest. Thanks mother nature!

Sunday morning we said goodbye to Bryce and headed through Red Canyon back towards US-89 on our way to Zion. This is when we figured out that it was a holiday weekend. Zion is a very popular weekend destination for those living in the Las Vegas and Los Angeles areas, and even more so on holiday weekends. Since Alex and I didn't get Monday off as a holiday, we falsely assumed that it wouldn't be that crowded. As we entered the park from the eastern entrance, nothing seemed out of the ordinary. There were a few cars going the same direction as us, down into the canyon, but it seemed pretty normal. Once we got closer to the tunnel, I noticed there were quite a few cars parked along the side of the road in places people don't normally need to park. Almost every turnout was filled with parked cars. Our plan was to hike the Upper Emerald Pools trail and also the Riverside trail. We had it all planned out so we'd know how long we could take for each one. As we got to the bottom of the canyon and reached the turn onto the scenic drive, the realization that it was a holiday weekend set in. There were rangers stopping traffic from entering the canyon. We were told that it was a busy weekend and they were at capacity in the canyon. We could wait 45 minutes and hope it cleared out some to allow us in, but that seemed ridiculous. I decided we'd go check out the Kolob Terrace section of the park, since I had never been up there. As we drove out the western entrance to the park towards Springdale, we saw the extent of the ludicrousness that was a holiday weekend at Zion. There was a line of cars backed up for almost two miles, through almost the entire town of Springdale. It was incredible. I've been to Zion for some of the most crowded weekends before, but I've never seen anything like that!

The Kolob Terrace section has fewer hiking trails, but it provides direct access to the wilderness section of the Zion National Park. You need a backcountry wilderness permit to hike in most of these places. There are a couple of trailheads that had signs that didn't appear to require the permit, so we checked them out. As we were improvising the rest of the day, I decided we could do some hikes up near the top. The map showed that the road was not plowed past a certain point, but I figured we could at least drive to that point and hike some trails. There was way too much snow, so that idea was a bust. After driving a little way down the dirt road to Smith Mesa, we turned around and found somewhere to eat the sandwiches we picked up from Subway in Mt. Carmel Junction. We tried the Right Fork trail, but found that as soon as we entered the wilderness area managed by the NPS, the trail dropped steeply down the canyon wall. It was too steep to attempt to hike down without something like a walking stick or cane, and so headed back down the mountain. Finally, we decided to check out the Coal Pits Wash trail. We hiked about a mile in on that, and turned around and headed back to the main area of the park to see if it was less crowded.

When we got back to the park, it was indeed less crowded. Since it was late in the afternoon, most folks were heading out of the park. We had a nice easy drive to the Temple of Sinawava at the end of Zion Canyon Scenic Drive. We did the Riverside walk as the sun was setting, and then headed into Springdale for some dinner at Casas de Amigos. I had some bland enchiladas, beans and rice. It was better than Oscar's, but it still wasn't very good Mexican food. It's hard to find good Mexican food outside of California it seems. We were staying in a cabin at Zion Mountain Ranch that night, which is outside the eastern entrance to the park. That meant I had to drive back through the park in the dark. It was amazing. There were very few cars on the road, and the tunnel was nearly deserted. Once we exited the eastern end of the park, there were tons of deer hanging out on the roadside. It was a little eerie knowing they were so close to the road, and I ended up driving well below the speed limit to make sure none of them jumped out in front of me unexpectedly. 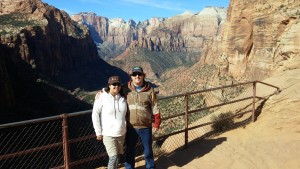 After showering off the day's adventures, we sat on our cabin's porch for a while just looking at all the stars. It's impressive that so many stars can be seen when you have clear air and very little light pollution. I easily spotted Orion and the Big Dipper constellations, something I can't do from my backyard at home in LA county. The next morning, after breakfast and a photo session with the animals of the ranch, we headed back into the vastly less crowded park. Since parking was less horrendous, we stopped and hiked the Canyon Overlook trail. After waiting for an "escorted" RV to finish traversing the tunnel, we headed down the canyon one more time to go home. After stopping in Hurricane for gas, we hit the road for home. Shortly after passing through Las Vegas traffic started backing up. What normally would take about 15-20 minutes to get from Jean to Primm took more than an hour due to the constant stopping and going. As soon as we got through Primm and the truck lane returned and everyone got back up to highway speeds. That was the case until we lost the truck lane again, and everyone came back to a standstill. It took another 40 minutes to go what normally would take 9 minutes with no traffic. Finally we got past the point of constantly stopping and going and traffic was smooth the rest of the way home. Even Cajon Pass had a pretty good flow of traffic with minimal slowdowns, even with all the construction taking place.

Overall, it was a great trip, and I'm glad we took it. Next time though, we will take a Monday & Tuesday off to avoid those insane holiday weekend crowds.