adventure2019 / Western Caribbean Cruise
For our five year anniversary, we decided to take another Caribbean cruise. This time, instead of the eastern Caribbean, we went on the western route. This took us on the following route: Port Everglades, Florida → Princess Cays, Eleuthera, Bahamas → Falmouth, Jamaica → Georgetown, Grand Cayman, Cayman Islands → Cozumel, Mexico → Port Everglades, Florida. This was a seven day cruise aboard the Regal Princess. Like our previous two cruises, we thoroughly enjoyed it. 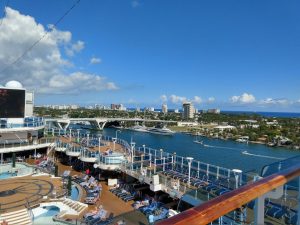 This time we were doing an OCEAN Medallion cruise, meaning instead of a cruise card, we got these little medallions that gave us access to everything on the ship. In addition to door access, purchases, etc, we were able to use them to play games on various portals around the ship. Throughout the cruise I played an adventure game that had me walking back and forth from one end of the ship to the other, as well as up and down the various decks. It was relaxing but at the same time kept me moving and helped me hit over 10k steps on most days of the cruise. Since I finished the game, I won a t-shirt with the Princess logo on it. Alex also entered a different game tournament where she matched icons on a screen. She scored 21 points, claiming 2nd place in the tournament. I told her it was all her experience with games like Bejeweled and Candy Crush that helped her win. She won a package of items including a t-shirt, a badge reel and medallion insert, and a Princess bag. I really liked the way everything worked, even though it seemed like a gimmick at first. Hopefully all of our future cruises will have this on them. Now, let's move on to the adventure side of things.

Our first stop in the Bahamas on Monday, had us take a tender to shore at Princess' private resort on the island of Eleuthera. We hung out on the beach for a few hours, swam in the warm, clear waters, and then took a very casual bike ride tour down the road a bit to learn about some of the history of this portion of the island. Overall, it was probably our most relaxing port day, since it was mostly just hanging out in the water. After a fun filled day, we headed back to the ship on one of the last tenders of the day to get ready for an awesome steak dinner at the Crown Grill.

The next day was an "at sea" day, meaning we did not visit a port. We headed south between the islands of Cuba and Hispaniola and got to see Cuba from a far off distance. It just looked like mountains off in the distance. 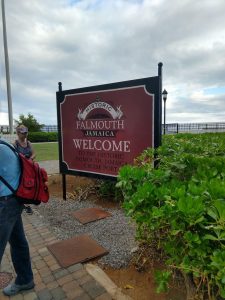 Wednesday morning we woke up bright and early to see that we were docking in Falmouth, Jamaica. We had a fun filled day planned, starting with hiking Dunn's River Falls and then seeing a shark show at the nearby Dolphin Cove. As we were arriving at the Falls, our guide informed us that if we didn't want anything to get wet, we should leave it in the bus. So Alex and I, along with pretty much everyone else in the bus stripped down to our bikinis and swimming trunks and headed into the park. It was set up kind of like an amusement park, which concerned me a little bit. It was very well controlled with security guards all over the place. Once we got in, we were introduced to our guide, Paul, and waited under a patio until the group was sufficiently large. While we were waiting, it start to rain, and then it started to pour. About the time the rain started coming down at its heaviest, Paul informed us that it was time for our group to head out. We walked, wearing barely any clothes, down to the beach to begin our climb. By the time we got there, we were soaked. In the end, it probably was a blessing that we got pre-soaked, as we were going to end up in the river anyway. After some pictures and a brief overview of what was going to happen, we formed a human chain and headed up the first part of the falls. It was amazing how much water was coming down the rocks, but because of the chain, everyone made it up to the first pool. From there, it was more climbing and walking through the pools. It was a great experience, and I highly recommend it if you are in either Falmouth or Ocho Rios. It's a bit of a bus ride from Falmouth, but it was worth the trip out. After we finished climbing the falls, we tried to buy a DVD containing our adventure on film. Unfortunately, our plan to bring only gift cards to avoid having any fraudulent charges show up on our credit cards backfired. The gift cards were marked as "Only valid in the US" in very small print, and we were unable to buy the disc. That was a bummer, but at least we have our memories. 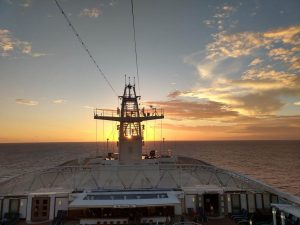 Next our guides bused us a few minutes down the highway to the Dolphin Cove. They provided an adequate buffet lunch, and then let us go see the various things in the cove. It wasn't really very exciting, and there was no shark show scheduled for the time we were there. We did get to see two nurse sharks swimming around in the pool below the walkway though, so that was kind of cool. We ended up just walking around for a bit and then stuck our feet in the kids pool until it was time to head back to the ship. If this excursion was split, and you could pick just the falls, it would be a much better proposition. The Dolphin Cove was just a waste of time we could have better spent doing something else on the island.

The next day was a super early day. We arrived in the Cayman Islands around 5:50am, and we were up at that time to make sure we had breakfast before meeting to go on our excursion at 7am. We took a tender to the island and then a short bus ride from the port to a small marina where we boarded a boat to take us out to Stingray City. This was pretty cool, being able to get out in the middle of the ocean and stand on a sandbar while stingrays and other fish swam around us. Alex fed and kissed a stingray (I just touched it), and then we took a short jaunt over to a reef to snorkel. The water was really crowded though, and it was much less fun than other snorkel tours we have been on in the past. Finally, they took us to Starfish Alley, which really was just some murky lagoon water that didn't offer much in the way of sights. Some of the crew on the boat jumped in and picked up a few starfish to show us, and then we headed back to the marina. After a short bus ride back to the port, we took a walk around the area immediately near the port looking for somewhere to eat. After stopping by the recommended restaurant and deciding it wasn't for us, we ended up at a burger and hot dog food truck. The burgers were pretty dang good, and I had a Dr. Pepper with my burger. We sat and watched the waves roll into the beach while we ate, and then did some shopping in the various gift shops before taking a tender back to the boat. 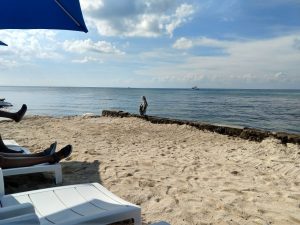 Friday marked our final port day. We were in Cozumel, Mexico from 10am to 9:30pm. Since we had such a long time in port, we picked two excursions to go on. First we took a tour of the jungle on ATVs, which was extremely fun and I would definitely do again. The entire crew that explained things to us as we visited various areas were nice and helpful with us newbies trying to ride ATVs for the first time. Towards the end of the tour, I was hooked and wanting to go faster, but alas, I was at the back of the line and there were slowpokes in front of me. When the ATV tour was over, we headed to a "beach club" called Aquarium. There were not any actual aquarium exhibits though. Other than a picture of us holding an iguana, the whole endeavor was boring, and like Jamaica, we were wondering why they tacked this part onto the excursion. We just wait on some chairs in the sun watching pelicans repeatedly dive into the water to catch fish until our hour was up and we could board the bus to head back to the ship. We went back, dropped off extra stuff we didn't need, and then back to the port for our sunset cruise. We boarded a pretty neat catamaran and they took us up the east coast of Cozumel to the northern point of the island where we watched the sunset. The whole time they were handing out margaritas, beers and sodas. Alex had three margs and I had two or three Pepsis. After the sunset, we headed back down the coast to the dock and headed back to the ship for the night.

The next day was our final day at sea before returning to Florida. We slept in, ate all the food we could manage, and just hung out all day. It was probably the most relaxing day, we didn't really do much of anything except eat, sleep, shop and read our books. Eventually though, we had to pack our clothes up and get ready for an early departure the next morning. We were up and ready to go by 7am because of our early flight out of Fort Lauderdale, and we flew back home, closing the book on another fun and exciting vacation.