adventure2021 / Moab, Utah
After the Thanksgiving holiday in 2021, Alex and I took a couple of days to visit Moab, Utah and the "Needles" district of Canyonlands National Park. We drove over from my parents' house in Kanab via SR-12, going through Red Canyon, Bryce Canyon and Capitol Reef before arriving in Moab. We got into Moab after dark, and stopped for some burgers at The Spoke on Center. It was Black Friday, and the streets of Moab were pretty crowded, as were the restaurants. We had about half an hour to kill before we got a table, so we did some shopping, and I got a cool bike chain frame for my desk at work. Once we got into the restaurant, we both ordered the "Two Pigs and a Cow" burger, which is a beef cheeseburger with onion strings, bacon and pulled pork on top. It was delicious, same as last time I had it. We checked into the Wingate hotel after dinner and hit the hay, preparing for an early start the next day.

Saturday morning we arose with the sun to get our free hotel breakfast and prepare for the day. After getting gas at the Maverik, as well as some sandwiches to eat for lunch we headed down to the Needles district of Canyonlands, which is over an hour drive from Moab. Next time, if we're going to visit that district again, I think staying in Monticello will be a better option, or maybe we'll have a travel trailer and we can camp in the park. Stopped at Newspaper Rock on the way in the park, and then continued to the visitor center for a rest stop and some shopping in the little store.

Once done at the visitor center, we drove down the scenic drive to the end of the road, where we got out and did some exploring and took some photos of us doing goofy things in and on the rocks. There were a lot of cars parked here, but not a lot of people around, so I assume they were off on some of the trails spreading out from there. When we got back to the truck to have some lunch, there was an RV parked right behind us, so I ended up driving up the road a couple of minutes to a turn out where we could eat lunch in peace. Conveniently, there was also a much nicer view of the whole park since we climbed back up the hill a bit to get to that spot.

After lunch, we stopped at Pothole Point and saw all sorts of cool creature hanging out in the potholes. We saw some cool shrimp and lots of interesting bugs that spend their whole lives in a little bit of water in a hole in a rock in the middle of the desert. Alex chatted with a couple who were traveling around southern Utah, taking pictures with their stuffed prairie dog, Nona.< 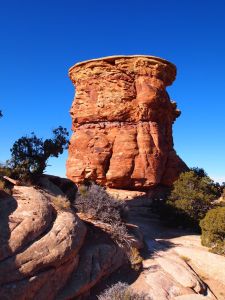 The next stop was the Elephant Hill trailhead, where we got one of the last two parking spots available, so we could do a more substantial hike. At this point, we only had about 3 hours of daylight left (winter sucks) so I set an alarm for an hour and a half and we started hiking one of the trails suggested to us at the visitor center. I wanted to make sure we were back and off the dirt road that led to this trailhead before it got dark. It didn't seem like a great road to be trying to traverse at night. The trail took us through some cool terrain, and we were effectively "in" the needles. There were a couple of slots that we had to navigate down to continue the trail, but shortly after the second one we ran out of time and had to turn back. Next time, we'll try to plan for more time so we can actually get to the destination before turning back. It was still a nice hike, and we saw plenty of beautiful scenery, so it was still worth the effort.

Making it back to the truck before dark, we stopped by the campground before heading out of the park. It looked really cool, and very spread out. It definitely seems like somewhere I'd like to camp at in the future. The drive out of the park seemed much quicker than the drive in, and before we know it, we were back in Moab. Being hungry from the long hike, we stopped at Fiesta Mexicana for dinner before going back to the hotel for the night.

The next morning we checked out of the hotel and drove over to Rotary Park to prepare our e-bikes for a ride around Moab. It's really known for the mountain biking scene, but it's definitely a fun place to do some city riding as well. There are bike lanes everywhere and the traffic is tame enough to be comfortable riding around with it. I wanted to check out the trail that runs along the Colorado River, so we headed along Mill Creek Parkway as far as the bike path took us, and then jumped on some of the side streets, also with bike lanes, to head towards the main highway. As we were heading up the street, Alex hit a bump and knocked her chain off, so we had to stop and put that back on. Once we got to the highway, we crossed and found another neat bike path that separated us from the traffic on the highway itself, and lead straight towards the Lions Park trailhead near the river. 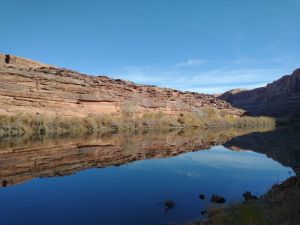 From there, we rode the Goose Island trail along the river until it merged back in with the highway. I thought that was the end, so we turned around after taking some pictures, but after looking at the trail in satellite photos when returning home, I saw that it splits off again and goes further. I wish we'd have ridden a little further along the path; maybe next time. It looks like it ends at a dirt trail, so that might be fun to do with a mountain bike so we could continue riding after the end of the road. We rode back to the truck using the same route we took on the way out, and packed our bikes back inside. Before leaving Moab, we stopped at Blu Pig to have some tri tip sandwiches and then hit the road for Kanab. We took the northern route along I-70 to US89 on the way back to save some time. It was interesting terrain that we had to cover, but essentially it's a pretty boring trip except a few bright spots like where it climbs up and over the Waterpocket Fold.

We made it back to Kanab just after dark and finished off another fun, but short trip in southern Utah. I wish I would have scheduled an extra day in Moab so we could do some more riding or hiking, but I guess that will just have to wait for next time.