With our new toys, the Waverunner and Sea-Doo, we made our way up to Lake Powell in the Glen Canyon National Recreation Area. This is probably my most favorite place in the world. The trip started out with a drive out to Lake Havasu City. It's out of the way for traveling to Lake Powell, but my parents needed to pick up my uncle's boat for the trip. 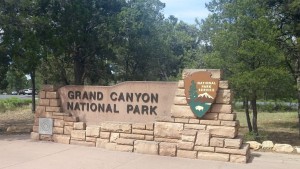 We followed them out there, and launched the jet skis for a short time before heading back to the ramp due to the choppy, crowded lake. The water was very warm though, so we floated in the bay and swam for a bit. After one afternoon at Havasu, we decided to just head up to Page, Arizona, our base for our week-long trip, instead of sticking around or staying in Flagstaff. The drive was very nice, and Alex and I stopped at the South Rim of the Grand Canyon on the way, since it only added about 100 miles to the trip. We recently visited the GC in November, but it was interesting to see how much more crowded it is in the summer, which it is considerably so.

This year, instead of trying to find a comfortable hotel for myself and Alex, along with my parents, I decided to rent a house called the Red Rock Retreat in Page via VRBO. It was probably one of the best vacation decisions I've ever made. The house was very comfortable, and the owner, Janell, was a great host. I hadn't planned on getting to Page on Sunday, so we had to find a hotel to stay at for one night. We stayed at the Super 8 in Page. It allowed us to get an extra day on the lake, instead of traveling from somewhere else. The hotel was decent, and like always, there were many more foreigners than Americans. Lake Powell has been a tourist draw from all over the world for as long as I can remember, and that aspect hasn't seemed to change.

The following day, we got out on the lake, and found a nice sandy spot at the very back of Warm Creek Bay. We stayed there all day, hanging out in the shade, swimming and scooting about on the PWCs as we felt like it. Towards the end of the day, some scavengers started circling our spot, looking for a place to beach their houseboat for the week. As we finally packed up, a family immediately swooped in and claimed the spot. I remember when Lake Powell was so uncrowded, something like that would never happen; now it seems to be the norm. 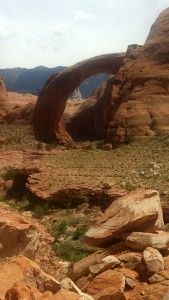 The next day we decided to take a boat ride up to Danging Rope and Rainbow Bridge. The ice cream in DR was just as good as I remember it. We got in a bit early, so we had our ice cream before lunch. Having a fast boat will make the lake much smaller. After our ice cream and some people-watching, we headed up lake to Forbidding Canyon, and then into Bridge Canyon. The hike up to the bridge was more than a mile, one-way. It was very hot and sunny, and very little shade at that time of day. The bridge was as awe inspiring as ever though, and well worth the hike up to see it. After getting back to the boat and cooling down for a bit, we went back out to the main channel and up to Oak Bay. It was crowded, and we couldn't find somewhere to safely beach for lunch, so we ended up floating in the bay while we had turkey sandwiches. We took advantage of the floating restroom in the bay, and as I was waiting to untie the boat, I saw lightning in the distance. A storm was brewing, and it was heading right towards us. We failed an attempt to get back down-lake before the storm made it to the main channel. There wasn't much wind, so the water was smooth, but the rain was coming down in big drops, and in a boat going 60mph without a windshield, it stings. After making it back down far enough to seek shelter at Danging Rope, some more people-watching commenced. All sorts of people were hanging out, waiting for the fuel pumps to be turned back on. During a lightning storm, they shut down the fuel dock as a safety precaution, so quite a few boats were just waiting around until they could fuel up and head out. As we were waiting, there was a dog that was very excited to see all the carp coming up to the surface as his family was feeding them. He got a little too excited and jumped into the water, right on top of the fish. It was hilarious, as they had to tug the dog back aboard the boat by his leash.

After the storm seemed to die down a little, we tried again to make it down-lake. We got as far as Rock Creek Bay before the wind had whipped up some very large waves with whitecaps. Not wanting to die, it was decided to find another sheltered beach to wait out the storm. After finally seeing the most significant portion of the storm move past, we headed back to Antelope Point Marina, where we had launched for the day. Before pulling the boat out of the water, dinner was had at the marina restaurant. I had a bacon cheeseburger, and it was pretty good, but not really the best I've ever had. They skimped on the bacon!

Wednesday brought another lounge day. We decided to stick to Wahweap Bay, to avoid going through the Castle Rock Cut again. What seemed to be a very good spot back in a small canyon turned out to be not so great. Although the canyon was no more than 50ft wide, it opened up to a somewhat larger bay toward the back-end, and there were multiple houseboats beached. It's pretty impressive that such large boats could be navigated through such a narrow channel. Anyway, due to the large number of people back in the cove, there was constant traffic going by, causing all sorts of mayhem with the less than stellar beaching conditions. We hung out as long as we could tolerate it, then headed back. At this point, I had a pretty nasty sunburn, and needed to seek some shade.

The next day, instead of going out on the lake again, we headed for the Best Friends Animal Sanctuary in Kanab, UT and ultimately to the North Rim of the Grand Canyon. Kanab is such a beautiful place. Although it's a long term goal, I would eventually like to get out of California and live in or around that area. The animal sanctuary was kind of boring. We took a tour, and although we got to see some cats and dogs, we did not get to see any of the more "exotic" animals up close, like pigs, rabbits, donkeys, etc. I use the term exotic loosely, since those are pretty common animals, but not something I personally get to see on a regular basis. I know it's not a zoo, but unless you volunteer, you pretty much are stuck with the boring tours.

The Grand Canyon North Rim was very nice. It is at such a high elevation that it was significantly cooler than the rest of the trip had been so far. It even rained sporadically to keep us cool on our short hikes around the edges of the canyon. At the lodge, there was a Ferrari Testarossa parked with dealer plates. I surmise it's cheaper to register something like that to a dealership than to an individual. Either way, that's a cool way to travel to the GC. On the way out, it was getting towards sunset, and all the deer were out grazing. I must have saw at least 30 deer just hanging out at the edges of the meadows eating and drinking. We got back into Page pretty late, and not many restaurants were open. We ended up eating at Sonic, but there were tons of weird black beetles wandering all over the ground and dropping from the sky.

The next day was our final full day in Page. We went out on the PWCs and found a nice red sand beach in Warm Creek Bay. The water was amazingly warm, and since it was the last day of our trip, I spent most of my time swimming and floating in the water. On the way out, we went through the narrows, which is a bone jarring experience on a PWC. It was like riding through a washing machine. I wanted to show Alex what Glen Canyon Dam looks like from the water level. The water was so low this year that it did not even reach the spillway cuts. After heading back to the ramp, we loaded everything back on the trailers for the last time of the trip, sad that it was over already.

On go-home day we stopped by the Carl Hayden Visitor Center before heading home through some of the craziest thunderstorms I've driven in for a long time. There was tons of rain and lightning along most of our route, and a huge dust storm between Mesquite, NV and Las Vegas. It's a long drive from Page all the way home in the SGV.

We'll be back Lake Powell. Keep being the most awesome place in the world.