adventure2015 / Laughlin in May

The first lake trip of the summer! Now that we are proud parents of both a Waverunner and Sea-Doo, we like to take at least one trip per summer month out to the Colorado River, and more specifically, Laughin and Lake Mohave. The trip was planned well in advance, sometime in March is when I booked our hotel room. We decided to go cheap this time and stayed at the Pioneer Hotel & Gambling Hall. The room averaged $30/night, which is awesome compared to the other hotels in town on the weekend. The week before this trip, a fairly large storm blew into the west coast of the US, and we thought for sure our lake trip was going to be a bust. On the day we left sunny southern California it was cold and rainy, we were even woken up by thunder (very) early Friday morning. The temperature stayed in the upper 50s to low 60s from our home in SGV all the way to Laughlin. Hopefully the forecast would be correct and it would warm up for our next three days on the lake.

Saturday rolled around, and the weather outside was sunny, but pretty cool. Our drunk hotel neighbors were playing "quarters" in their room at 7am (WTF?), banking the quarters off our shared wall. Alex had to go yell at them through their door since they wouldn't open it. After that, we fell back asleep, since vacation is all about resting. We finally rolled out of bed about 10, had some terrible breakfast at the Bumbleberry Flats restaurant in the casino section of the Pioneer. We finally got our butts out onto the lake about noon. It was probably the most calm weather I have ever seen on Lake Mohave. The water was glassy as we headed up-lake from Princess Cove to our favorite spot in Granite Cove. I was expecting it to get windy later in the afternoon, as it normally does, but was pleasantly surprised that it did not. The wind stayed down, the water stayed smooth, and the temperature only got up in the low 80s, i.e. it was perfect. The only reason we headed back to the launch ramp at the end of the day was because I was hungry. We finally got to the Golden Nugget, next door to our hotel about 8pm and had some dinner at the Bubba Gump's. I had fried chicken and a huge helping of garlic bread. The whole meal was delicious.

Sunday we did our normal thing, which is to get up kind of early and have a quick snack of leftovers for breakfast. Alex ate the rest of her shrimp from the night before, I had a slice of garlic bread. We prepped and headed to Subway in Bullhead City across the river to order some sandwiches for lunch. They keep well in the cooler, and make for a great lunch. I usually eat half my sandwich for an early lunch and then the rest later in the afternoon to keep hunger at bay. The water was a little choppier on Sunday morning; the wind was blowing light and steady from the north, which is not very common for Mohave. My PWC rack held up beautifully, even on the choppy waters. The screws held up nicely, I don't think I'll need to glue it which was my main concern. The lake was very uncrowded and we were able to grab our favorite spot again. As the day wore on, the winds got stronger and shifted more northwesterly. Some large whitecaps were actually able to make it pretty far into our normally very sheltered cove. Then in the late afternoon the wind just died out completely. The lake got amazingly calm again and the eventual ride back to the ramp was smooth as butter. 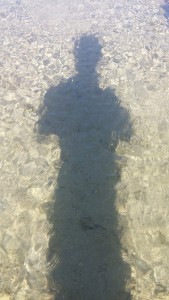 Monday was go-home day. It came so quickly, but we had an enjoyable short ride around the very southern end of the lake near Katherine Landing before my Spark started beeping at me that it was low on fuel. We headed back to the ramp after only about an hour of fun riding on, again, very unusually calm waters. One thing that I noticed, whether it was because of the weather, or maybe just the time of year, but the water in the lake was extremely clear. I am confident I was able to see details on the bottom at least 30-40ft deep. It's unsettling to see what looks like might be a rock you need to avoid due to the lighter water color, and then getting closer to it and seeing that it's probably under 20ft of water. Anyway, after getting all the gear cleaned, loaded, and ourselves the same, the long trek home began. I wanted to avoid having to go through Cajon Pass on the way home, so we took a roundabout route back. I exited I-40 at Kelbaker road, headed south through Amboy to California SR-62 and eventually to I-10. It was a little longer route, and it was a little worse on gas mileage going up and down so many hills, but it was pretty stress-free and that's what I prefer most on my road trips. Interestingly enough, this was the same route (in reverse) that began our Canyon trip last November, we even drove by Amboy crater.

It was a great trip to start our summer season off, and I look forward to many, many more of them this year!