In March of 2015, Alex and I celebrated our one-year anniversary by visiting Monterey and the surrounding area. This is one of our favorite spots to vacation, we've been many times before. Our trip was just a stretched out weekend, leaving our home on Saturday morning and returning Tuesday evening. On Saturday, we left the SGV early Saturday morning. The plan was to get to Pinnacles National Park in the early afternoon so we could go on a nice hike through the caves. All was going well until we got to the 210/5 interchange. Traffic was a mess. I am not sure why it was backed up the way it was, but looking up the hill, it was brakes lights as far as the eye could see. I made the snap decision to take an alternate route. We were on vacation, why wait in traffic? We ended up taking CA-14 up to CA-58, where we cut through some very nice looking hills. There were a lot of California poppies just starting to bloom, and since it was spring time, things actually looked sort of green! We went through Bakersfield, cutting across farmland to get to I-5 to continue our northerly route. Taking this circuitous route added a couple of hours to our drive time, but it was definitely worth it over the alternative of sitting in heavy traffic trying to leave Southern California.

After a quick stop for a late lunch, we finally arrived at Pinnacles about 3pm. Due to DST going into effect the previous weekend, we had an extra hour of daylight for our visit. This time I decided we should go to the eastern side of the park. The last time we visited, before it became a national park, we had gone to the western side. The eastern side is much more crowded than I would have expected based on the long, two-lane roads we had to drive on to get there. It was quite loud for most of our visit, which kind of sucked. There were too many screaming kids. The caves on the eastern side of the park seem a little less curated than the one we hiked through in the west. I imagine it's due to the majority of the bats living at this end of the park. We checked out a cave, but felt it wasn't a good idea to go spelunking through the dark caves with so little light remaining in the day. We hiked up to the reservoir above the caves to listen to more loud people, before heading back the way we came. After making it back to the truck, we finished the drive up to the Quality Inn Monterey Beach Dunes in Marina, CA, which is where we stayed for the duration. It was a low cost hotel, but it was actually quite a pleasant place to stay for a short trip. 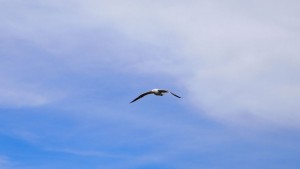 The next day was planned to be a beach day. The weather forecast earlier in the week predicted that the temperature would be about 80 degrees and sunny. It ended up being about 65 degrees and cloudy Sunday morning. We still tried to make a go of the beach, but the cold breeze clouds got the best of us. Since, by then it wasn't even noon, we decided to go check out Elkhorn Slough. It was a pretty nice place, with plenty of walking trails to get our blood flowing. I forgot to track our walk progress until halfway through, but it ended up being about 4 miles. Alex and I desperately need to exercise more, it was tough just walking back up the hill at the end of the walk. You are supposedly able to see a large assortment of marine life while visiting the slough. It's an estuary inlet where baby animals are relatively safe from the outside world and can grow up. When we were there, the tide was very low. We were unable to see anything other than humans kayaking in the main channel of the inlet. Disappointed, we headed to my next snap decision: Moss Landing. I just wanted to go look at all the boats in the marina. I wasn't expecting what we actually found, which was a sea otter hanging out by the boat launch ramp! It was using the dock as a buffet. We watched it swim under the dock, forcibly remove a bivalve of some kind from the underside, then come up and start smacking it against the dock. It was able to break the shell and eat the innards, looking very content as it did so. There was a family with a dog on the dock as well, and the otter didn't seem scared of any of us. It just did its thing and ignored us. Across the harbor was a beach covered in either sea lions or harbor seals. They weren't being loud, which leads me to believe they were seals, but I am not sure. Somewhere south of where we were there were sea lions being loud and obnoxious. After checking out the various beaches and other shoreline access around Moss Landing, we headed back to the hotel for the night.

Monday we slept in a little before heading to the Monterey Bay Aquarium. When visiting the area, this is the place people tell you to visit. It is an amazing experience. This year they had a new exhibit called Tentacles. It was all about various cephalopods including octopus, squid, cuttlefish, and an interesting creature called a nautilus. We watched the morning feeding of the open sea exhibit, where a school of sardines swirling all over the tank while a dolphinfish, aka Mahi was trying to catch himself some lunch. It was pretty cool, but we didn't get to see any of the sharks eat, which was slightly disappointing. We checked out the remaining exhibits at the aquarium, hung out with some penguins, then headed out near closing time. We walked around Cannery row until we were hungry, and stopped at the Bubba Gump's for a very filling dinner. 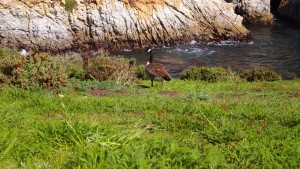 Tuesday was going home day. Before we left the area, Point Lobos preserve was on the agenda. It's just past Carmel heading down CA-1. It's an amazing place to be. The water looks so inviting and the sea life is abundant. While we were there we saw dolphins, sea otters, sea lions, harbor seals and a whale! Well, I think it was a whale, it came up for air but was gone before I fully realized what it was. It looked a bit too light to be any of the whales that are normally seen around that area, but it may have been a trick of the light. We hiked along the shoreline to China Cove. I couldn't get the Doobie Brothers song "China Grove" out of my head the whole time we were there. After seeing everything we wanted to see, we had some Really Good burgers in Carmel, literally. The place was called R G Burgers, where the RG stood for Really Good. I enjoyed my burger with bbq sauce, bacon, cheddar and onion straws.

Google Maps took us through an interesting route through lots of farms and along the Salinas river to get to US-101. We headed south through Paso Robles and across the hills back to I-5. I decided it probably wouldn't be the best idea to go back down through the Los Angeles area on the way home, so we cut through the Antelope valley on CA-138 over to I-15. That would allow us to go against the bad traffic, instead of with it. By the time we got to Palmdale, it was dark. It's interesting driving along these "back roads" in California. It's a whole different world than the LA metro area, where everything's freeways or surface streets. All along the 138, it's more like a street that you can drive quickly on. Someday I hope to live on a back road like this, away from the hustle and bustle of the modern world, although it will definitely be out of the nanny state of California.

All in all, It was the first of many successful anniversary trips to come.