Hungering for another vacation, Alex and I decided to use our extended Thanksgiving weekend to visit Petrified Forest National Park in eastern Arizona. We left early Friday morning. While others were out shopping on Black Friday, we jumped on I-10 headed east. Normally, it would make more sense to head out on I-210 toward I-15, but I wanted to take an alternate route, and avoid Cajon Pass. We drove out, and on a spur of the moment decision, decided to drive through Joshua Tree NP again, mostly just to use the bathroom in the visitor center there. The park was very crowded, much more than we've seen in the past. After driving through the park and making it back to the 10, we drove out through Blythe and up some smaller highways in Arizona. We followed a similar route I took in early 2007 in my Mazda RX-8. In Prescott, it was already getting dark, so we headed east to meet up with I-17 north, towards Flagstaff. We stopped at the Cracker Barrel for dinner before taking the final drive in the dark from Flagstaff to Holbrook, Arizona.

We stayed at the Howard Johnson in Holbrook. It was a very nice place to stay, the room was clean, the bed comfortable, and the free breakfast was pretty good. The city of Holbrook is about 25 minutes from the Petrified Forest, so after breakfast Saturday morning, we took I-40 east to the northern entrance of the park. After checking out the Painted Desert visitor center and buying some memorabilia, we started the drive through the park. After seeing tons of beautiful colors in layers along the desert walls, we got to the Puerco Pueblo, which is the ruins of an old pueblo that was inhabited by 100-200 natives hundreds of years ago. It was neat to see human history going back that far. A little way down the road we saw Newspaper Rock, which had even more evidence of ancient humans. Eventually, we traveled up to Blue Mesa and got to visit our first section of "badlands" where we did short hike to see some petrified wood. At this point, we were slightly disappointed, as it wasn't very much "wood" and it almost all seemed to be hand-placed by humans to view it along the trail. Hopefully, we'd get to see actual trees instead of small stumps of rock that looks like trees. 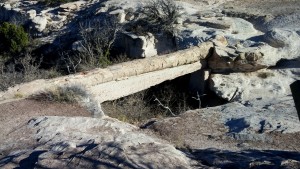 As we continued down the road, we came to something called Agate Bridge. This was our first "tree" that we saw on the trip. It's a span of petrified wood going across a gully. It is supported by modern concrete at the moment, but the park curators know that eventually, it will fail, and the bridge will tumble down the hill and break apart, just like most of the other wood in the park. It's the way of the park, as some wonders are exposed to be discovered by humans, others are destroyed. A short jaunt down the road brought us to Jasper Forest, which was a huge collection of stumps and chunks of wood skewed all over the area. Also, in the center of the one-way parking area is a fairly long, colorful log that you can actually get near enough to touch. Now we were getting somewhere, this is more what we expected to see at the park. 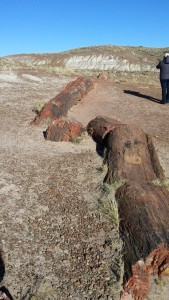 Eventually we made our way to the Crystal Forest. Sadly, people have stolen most of the crystal from the centers of the logs over the years. It was still amazing to be able to walk among such a large quantity of petrified wood though. The colors on some of the logs are brilliant reds and yellows, sometimes even pink. The processes that create things things are quite amazing, and it gets me wondering. Is it possible to synthesize petrified wood? About this time in the trip, the wind was starting to pick up, which it often does in the area. Between the cool weather and the wind chill, it was getting uncomfortable to stay out for very long. We drove down to the Rainbow Forest Museum to see about getting some snacks, and checked out the visitor center at this end of the park. There were a lot of cool dinosaur exhibits and even a creature called Placerias. I like to call it a Reptomammal, like Tauntauns and Rancors in Star Wars. They have mammalian features, but were considered reptiles.

After a long walk on what used to be a road, and now just a walking trail, we saw some long logs on part of that trail before deciding it was time to head back to the truck and out of the park to find dinner. We ended up at the Mesa Italiana in Holbrook. I had an excellent chicken parmigiana and Alex had a salad and shrimp scampi. We were both very impressed with the food. We headed back to the hotel and took a quick dip in the spa. The indoor pool is heated, but the room that houses it was quite chilly, and so we though it best to stay out of the pool. After that much walking around the park, falling asleep was easy. The next morning, after our free breakfast at the HoJo, it was time to drive home. Since we wanted to get home at at reasonable hour, I took the most direct route home, I-40 to I-15. The traffic going through Cajon Pass was intolerable, so we took a slight detour after getting gas in Hesperia and rejoined the 15 where it meets CA-138.

It was a good trip, but I think it was a bit of a stretch to go that far for a 3-day weekend, especially a holiday weekend. I think now we have determined our upper limit of distance from home we can do without having more than 3 days to enjoy it.